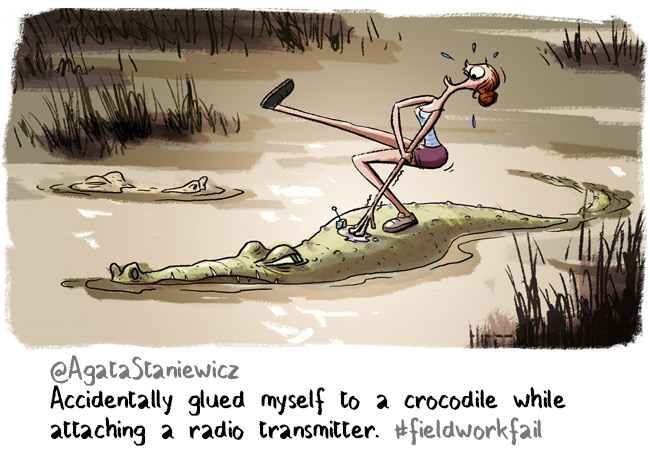 Can you explain what was your job about and why did you need to glue crocodiles ? 🙂

It was part of the research for my MSc in Biology – I’m now about to start a PhD. We were trying to find out the range size of crocodiles in Indonesian Borneo. It lets us know the habitat range the crocodiles need, and how they might interact with other species in the area (including other crocodile species). 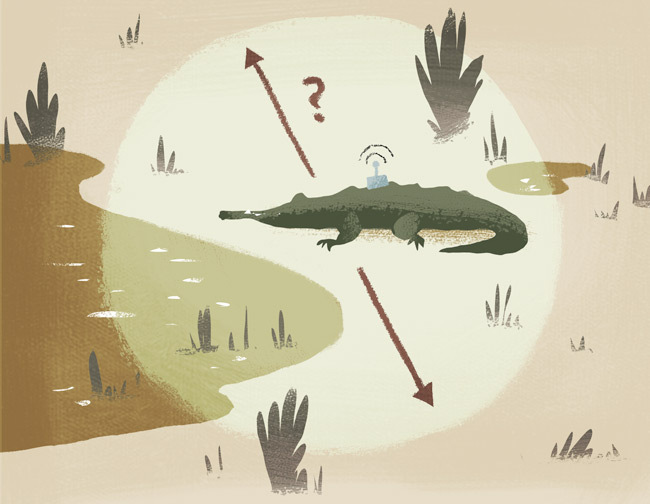 What happened after the hand glued ?

10 minutes of me detatching my finger from the crocodile without detaching the transmitter while the fishermen watched and laughed.

Then the croc lost the transmitter within 24 hours 🙁

Isn’it dangerous to glue things on crocodiles by hand ?

I suppose it is, especially if you’re not very good with handling the glue. I first catch the crocodiles and make sure their mouths are closed and secured (usually with tape or in case of a smaller croc, a rubber band). I also cover their eyes to reduce the stress experienced by the animal.

Someone also needs to hold the croc down (or sometimes sit on it, when it’s bigger) to make sure it doesn’t thrash around or roll. The crocs aren’t sedated or sleeping, so we just need to take all the measurements, mark the crocs and attach the transmitters as quickly as possible. 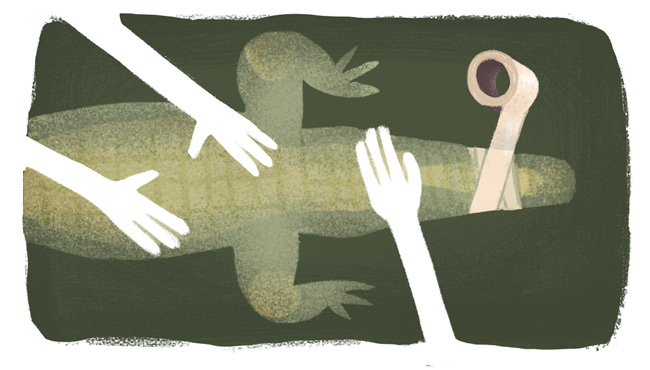 Are crocodiles in danger in Borneo ?

Some of them for sure. The two species I worked on, Siamese crocodiles (Crocodylus siamensis) and Sunda gharials (Tomistoma schlegelii) are Critically Endangered and Vulnerable, respectively. 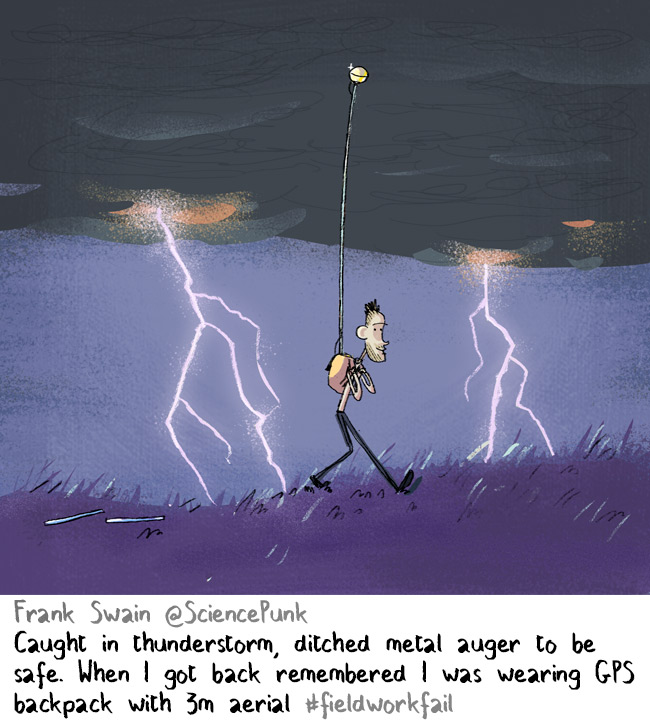 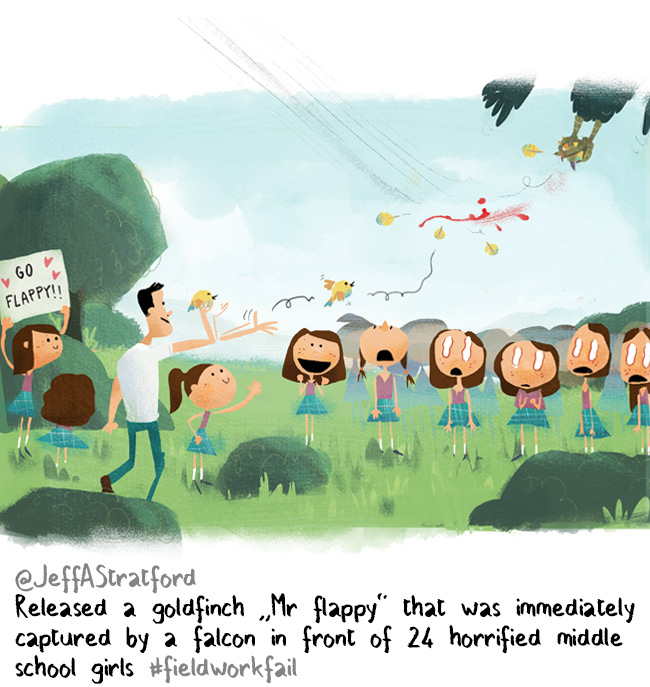 A few questions to Jeff :

What were you doing with this group?

I was leading a group of school girls on a bird walk along the Susquehanna River. The program is called Women Empowered By Science (WEBS) and we bring groups of young women on campus to do science with university faculty.

What did you do with the birds after catching them ?

Depends on the project. I was looking at blood parasites along urban-rural gradients so I was taking a small blood sample and releasing them. Lately, I’ve been catching birds to examine diets and I take blood samples and a tail feather. We take blood to figure out diets  by looking at the carbon-nitrogen isotopes.

All the birds are released and we often catch them in successive years. 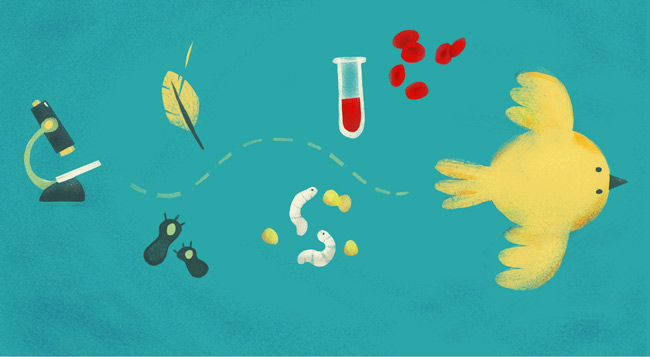 What happened after the unfortunate fate of Mr. Flappy ?

The teacher complained to our department chair that we didn’t ensure the safety of birds – that’s true but how do you keep falcons from eating birds?  Anyways, the daughter of that teacher was in WEBS a few years later and was skeptical of the whole exercise of catching birds. Well, in WEBS camp we captured a bunch of birds, all flew off OK, and the daughter came my shadow for the rest of the day.

What is your best memory working on the field ?

I’ve done research in the Brazilian Amazon, longleaf pine forests of Alabama, and old forests in the Poconos, but my favorite moments are catching birds for kids in our local urban park. 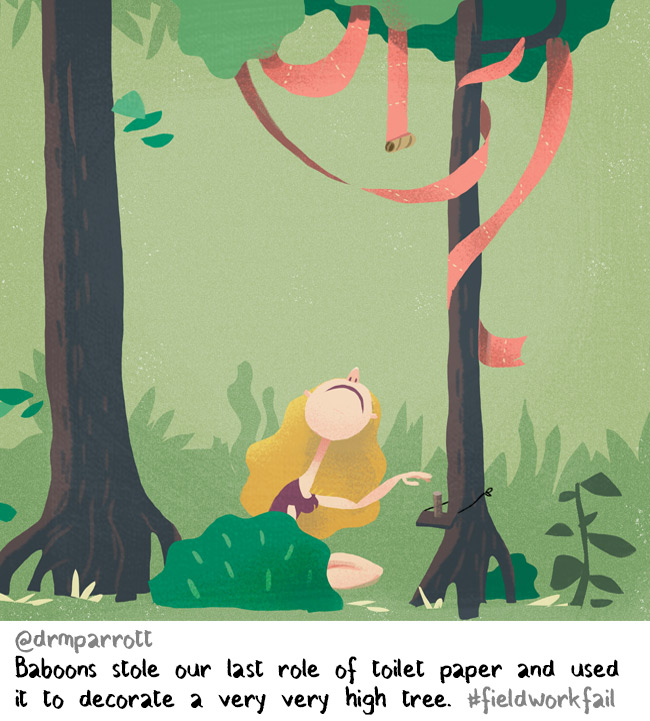 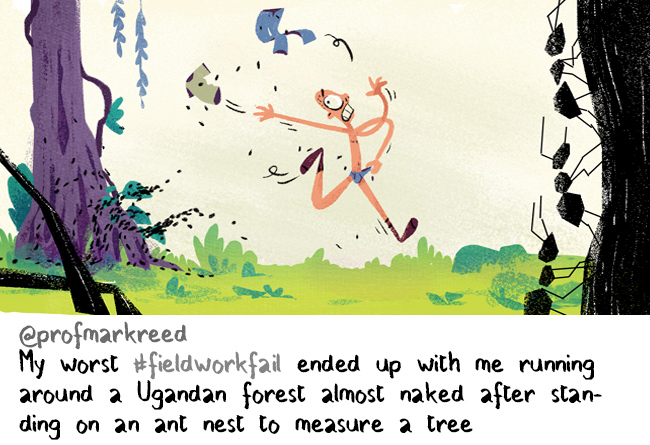 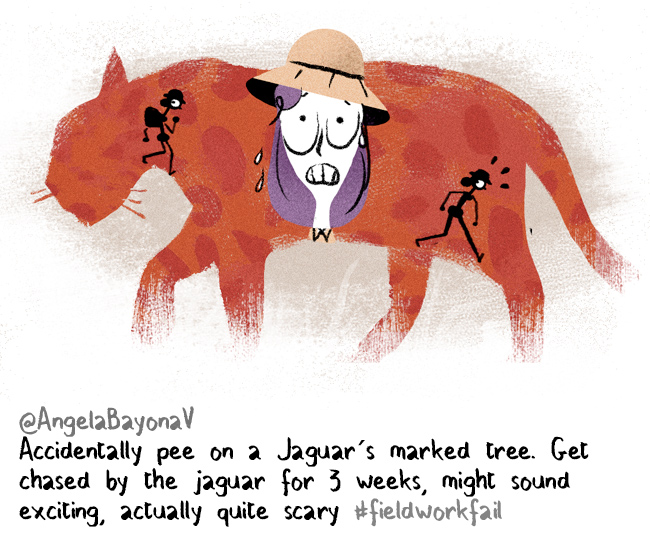 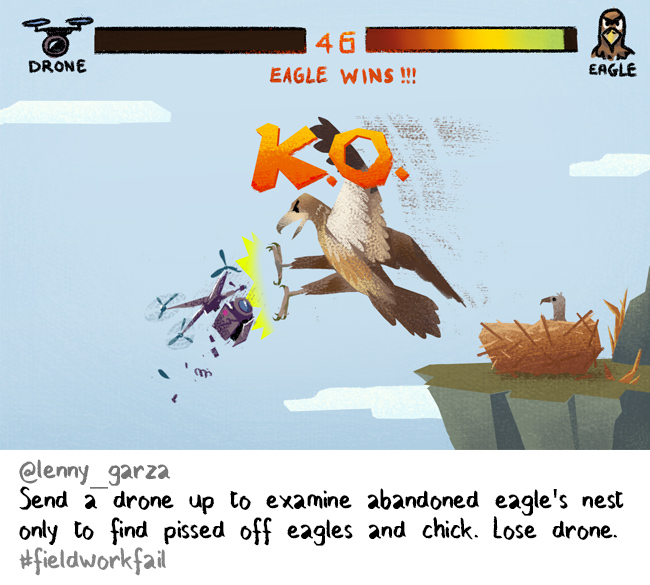 Blood on a Plane 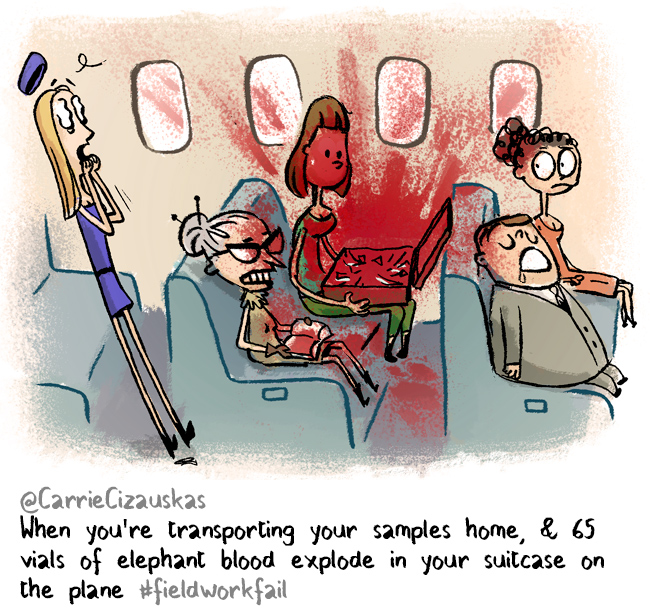 A few questions to Carrie :

Where were you at this time and why did you need to collect elephant blood ?

I was working in Etosha National Park, Namibia, on a large, collaborative project investigating the ecology of anthrax. Anthrax is an ancient disease (caused by a bacterium) found in endemic pockets worldwide, though the ecology behind anthrax outbreaks has been really poorly understood. There are yearly outbreaks of anthrax in Etosha, primarily in the wet season in plains ungulates such as zebra (my primary study animal). Elephants also experience anthrax outbreaks in Etosha, though typically during the dry season. While I primarily examined how zebra susceptibility to anthrax changed seasonally in this system, in conjunction with changes in things like stress, reproduction, and gut parasite loads, I also did some collaborative work on elephants. 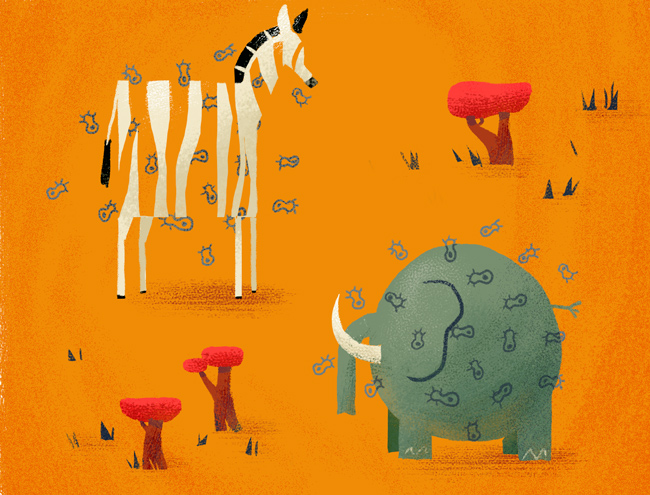 A few other researchers in my group were putting tracking collars on elephants to figure out where they went during different seasons (they can travel really far!), where they were when plains ungulates were experiencing anthrax outbreaks, and how they were using resources. When these animals were anesthetized, I collected several other samples, including feces to look at parasite loads, and blood to look at basic immune functions and to look for anti-anthrax antibodies. 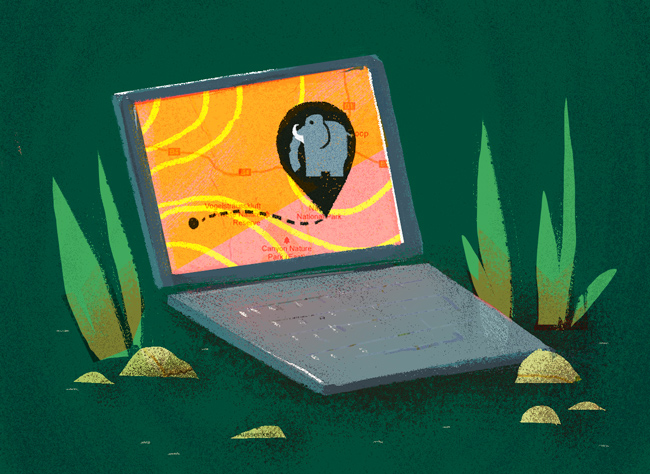 What happenned after the blood explosion?

I found the problem after I went to take my samples out of my luggage and put them in the lab. Quite a mess, but there was enough left over to do my work.

You never have security issues in the airplane ? We can’t bring shampoo but you have a suitcase full of blood packs ?

Ha, well, it’s common to carry samples back (with permits of course!) in checked luggage – the samples were in my checked bags, so I didn’t have to adhere to the 3oz rule going through security!

A story to tell ?

I’ve worked with a lot of different species thus far, so I could tell a lot of ridiculous stories. A recent one involves my current study animals, non-human primates in Kenya. There’s a small vervet monkey group that lives in the camp there (which I also try to sample from), which has been getting bolder and cheekier with time. The last time I was in the field, my then 3.5-year-old son was with me (he’s now four), and he often played in the outdoor dining area during the afternoon while I worked. One afternoon, my son was drawing on the floor with sidewalk chalk, when one of the monkeys made a dash for it and stole his purple chalk nearly out of his hand. The monkey brought it to the top of the nearby tree, where it proceeded to eat it – not just sample it, thinking it was a purple fruit, but sample it and then chomp down and eat the rest (while handing samples out to its group members). My son was SO angry, and from then on, berated my colleague Laura who had tracking collars on these monkeys, scolding her, “YOUR monkeys stole my art!” 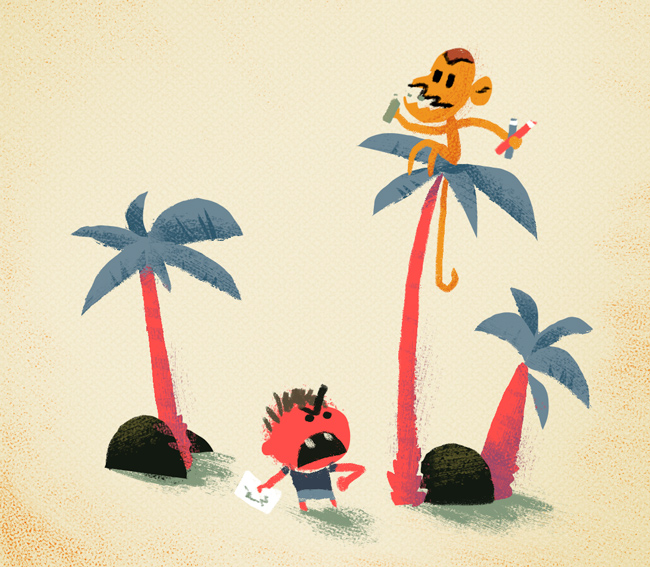 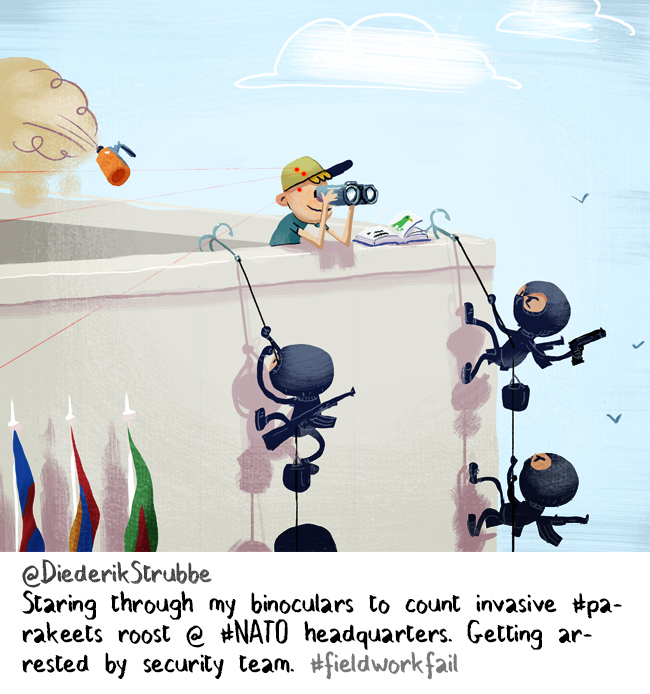 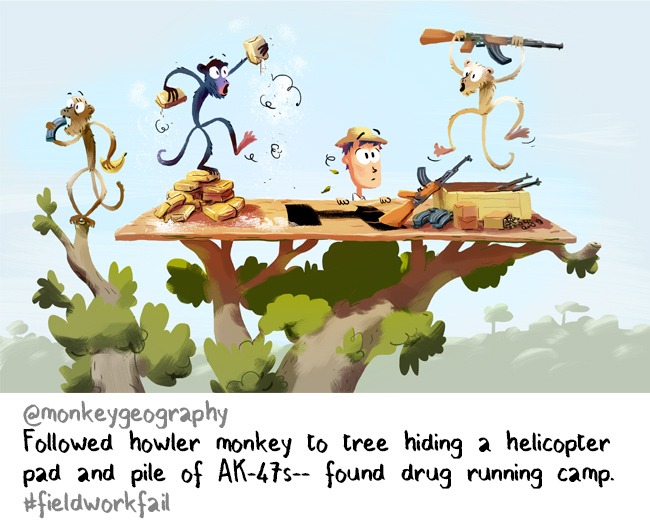 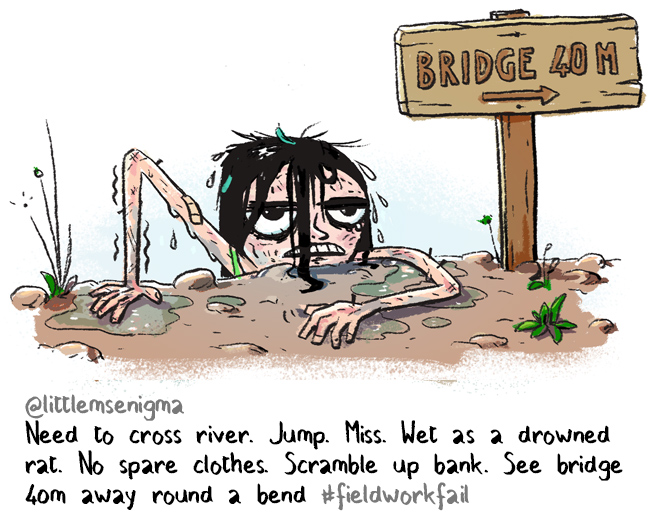 Search for the Fossil 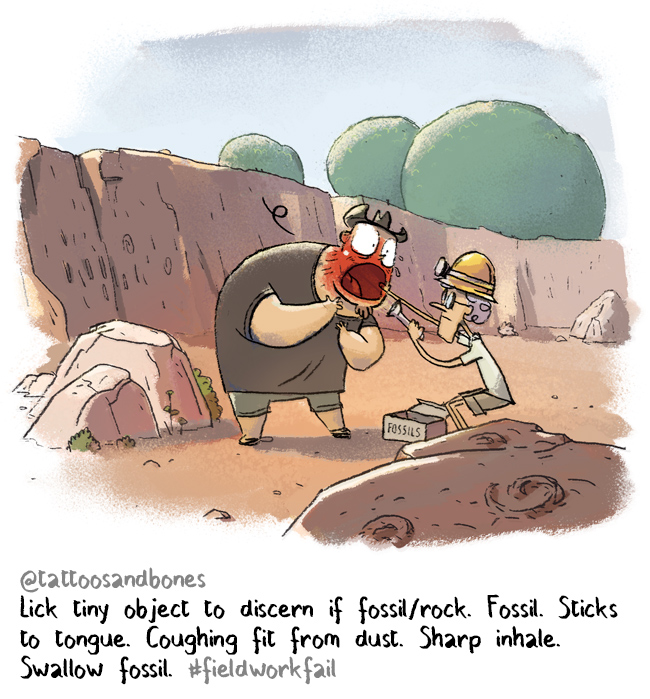 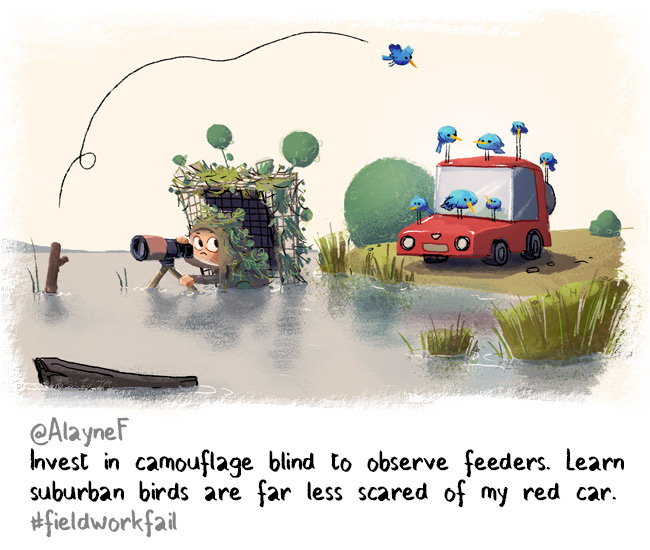